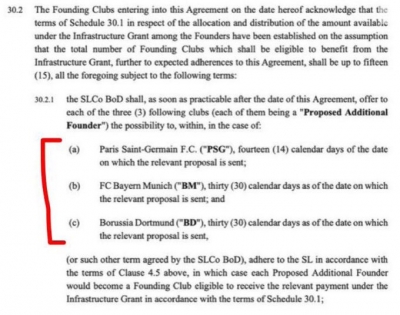 Review of the Day

Manchester United defender Eric Bailly has put pen to paper on a new deal which runs until 2024.

Borussia Dortmund full-back Felix Passlack has signed a contract extension to take his deal to 2023.

Manchester City have confirmed the signing of Brazilian winger Kayky from Fluminense. The 17 year old will not join until 1 Jan 2022, after he turns 18. The fee is believed to be around £10m + performance-related bonuses as well as Fluminense receiving 20% of any future transfer fee. The two clubs have also inked a cooperation agreement.

Union Berlin have agreed to sign Augsburg midfielder, and brother of Sami, Rani Khedira on a free transfer in the summer.

According to Kicker, the German football magazine, Julian Nagelsmann will take charge of Bayern Munich in the summer. The 33 year old is currently in charge of RB Leipzig, who are expected to replace him with Jesse Marsch, the head coach of sister club Red Bull Salzburg. It has been claimed that Nagelsmann, who is a Bayern fan, has asked RBL to terminate his contract so that he can join his beloved Bayern.

Augsburg have sacked their head coach Heiko Herrlich after a run of poor results saw them slide down to 13th in the Bundesliga table. Replacing him is Markus Weinzierl, who has previous experience as head coach at the club between 2012/13 and 2015/16, leading them to a Europa League slot in his final season before moving to Schalke 04.

RB Leipzig are searching for a new sporting director as current one, Markus Kroesche, will leave at the end of the season. Kroesche joined the club alongside Nagelsmann in 2019.

Sunderland and Oxford United have both been charged with failing to control their players by the Football Association. Sunderland’s assistant manager Jamie McAllister and Oxford’s head coach Karl Robinson have also both been charged with improper conducted. The match between the two teams on 2nd April was bad-tempered and Robinson claimed the police were called at half-time after goalkeeper Jack Stevens was allegedly headbutted.

VfB Stuttgart’s teenage midfielder Naouirou Ahamada has been given a 2-match ban for a red card he received against RB Leipzig on Sunday.

Italy’s FA (FIGC) have amended their rules to allow them to ban clubs that sign up to breakaway competitions in the future. If it had been in place before the aborted ESL launch, Juventus, Inter and AC Milan would have been thrown out of Serie A.

Spotify’s billionaire founder Daniel Ek has recruited Arsenal legends Thierry Henry, Dennis Bergkamp and Patrick Vieira to help him buy the club from current owner ‘Silent’ Stan Kroenke. Ek stepped forward to announce his interest in buying the Gunners due to Kroenke signing them up to the ESL.

Bayern Munich chairman Karl-Heinz Rummenigge has aimed a dig at Juventus chairman Andrea Agnelli over the failed ESL. Agnelli not just signed Juve up for the project, but was also set to be the vice-chairman of the league, while Rummenigge rejected the chance to join and the former striker said: “Andrea comes from a different generation and is a different type of person to me. I, myself, played football, I always thought I had a responsibility to football, not just to money.”

Real Madrid and European Super League president Florentino Perez has been caught out in a lie. The Spaniard said that Bayern Munich, Borussia Dortmund and PSG had not joined the ESL because they had not been invited, but documents leaked to Der Spiegel show that the trio were all offered a place in the ESL.

The La Liga match between Sevilla and Granada had a bizarre conclusion after the referee blew the whistle a minute early. Ricardo De Burgos blew for time after 93 minutes, despite indicating there would be four minutes of time added on. The players were in the dressing room getting undressed by the time De Burgos realised his error and called the players to come back out and play out time.