15 people succumbed in the last 24 hours bringing the number of fatalities to 996. 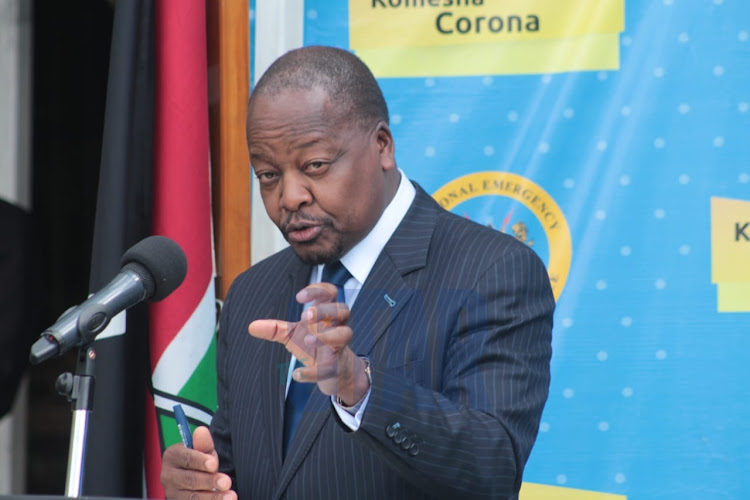 Kenya on Saturday recorded 1,395 positive cases, after a sample size of 7,635 tested in the last 24 hours, Health CS Mutahi Kagwe has confirmed.

The youngest is a four-month-old infant while the oldest is 94.

In terms of recoveries, 1,087 patients have recovered and of these cases, 1,019 are from the home-based care program while 68 have been discharged from various hospitals.

The total number of recoveries now stands at 36,963.

The CS also announced 15 people have died bringing the number of fatalities to 996.

Embu, Baringo, Nyamira and Wajir have two cases each, while Migori, Nyandarua, Trans Nzoia , Narok and Kirinyaga with one case each.

In Nakuru, the 149 cases are from Nakuru East (78), Gilgil (35), Naivasha (8), Nakuru North and Nakuru West seven cases each, Rongai six,  Molo three, Kuresoi South and Subukia two cases each and Njoro one case.

In Kilifi, the 41 cases are from Kilifi South (22), Malindi (10), Kaloleni seven, Kilifi North and Magarini one case each.

In Laikipia, the 27 cases are from Laikipia West (21) and Laikipia East six. In Machakos, the 26 cases are from Athi River (19), Kangundo and Machakos Town three cases each and in Matungulu one case. In Kajiado, the 25 cases are from

In Kakamega, the 15 cases are from Mumias East (9), Mumias West (4), Likuyani and Matungu one case each.

In Tharaka Nithi, the nine cases are from Tharaka South five and Chuka (4).

In Kisil, the seven cases are from Kitutu Chache South (6) and Nyaribari Masaba has one case.

ITALIAN SOMALILAND: THE ROAD TO TRUSTEESHIP

US Focused on Disrupting Finances for Somalia’s Al-Shabab